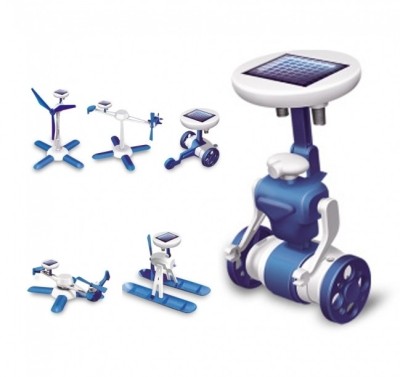 This is a solar educational kit by which you can show and teach children the important benefits of solar energy.  This is a good step for the children to start learning about solar energy.  This is something like fun and easy to inspire the interest in children.  From this kit, you can create six different fun solar toys to play and show how the solar power is used to drive small electric motor.  It is very easy to assemble and no tools are required for the 6 in 1 robot kit.  You can make models like car, robot, wind mill, helicopter and air boat.  This could be a learning and play tool for children as well as parents.

Features of the Emob 6 in 1 educational solar energy kit

How to buy this product

The EViO ESP-3000-1PM1085-BL  is a  3000 mAh dual solar and USB power bank which is an excellent battery back up for the mobile devices and smart phones.  The mobiles can be charged through direct sun light or USB.  The device uses the latest technology in solar panels to provide efficient charging solution.   The device is very light weight but durable and compact size and designed for outdoor use.  So you can charge your mobile phone at any place even in the forest,  only thing is that there should be sun light.  Here are general specifications of the solar battery bank from EviO. 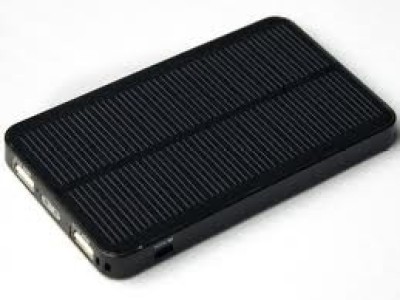 
How to buy this product

Posted by Raghav at 7:35 AM No comments:

The TATA Power Solar Diva 15L2 Solar Lantern is a product from TATA Solar Power.  This device can serve as a torch or as a table lamp.  The device has adjustable brightness

settings for the torch.  Over-charge, over-discharge and short circuit protection are provided. There is also an indication for battery's state of charge.  Some of the features of this produce are listed.


Components of the system :

How to buy this product:

Solar Panels also called as Photovoltaic or PV modules convert sunlight directly  into electricity.  The solar panels reduce the amount of electricity coming from fossil fuels by supplying the electricity with clean, renewable energy from sun.

Gram Power is a energy technology company founded in 2010.  They provide cutting edge Smart grid technology to provide electricity to remote villages in developing countries.  Yashraj Khaitan ( Indian) and Jacob Dickinson ( American ) are the founders of the company.  They are engineering graduates from the University of California.

They have set up India's first smart micro grid in Rajasthan in 2012 to provide electricity for lights, buttermilk machines, televisions, and fans.  Gram Power's  core innovation is in their Smart Grid Distribution technology which consists of their smart meters and Grid monitoring systems to provide on-demand theft-proof power to the users.  They are using solar panels for generation of power.

Khareda Lakshmipura village in Rajasthan never had any electricity till 2012.  But after 2012  the village had enough power that even if the north Indian grid fails,  they would be able to view Televisions.

Gram power was established in that village in Rajasthan in 2012.  The company provides continuous power to remote villages at a very less cost.  Similar to mobile recharge, we can pay money in advance as per our requirement of electricity..  So you need to recharge for a certain amount of money and they will provide you electricity through micro grid. The smart meter provided by the company will show you details of the usage of electricity, amount of money in your account and how many more hours you can use the power etc....

Gram Power's Micro Grid  is powered by a centralized array of solar panels which collect the sun's energy and convert it to  DC power.   Surplus solar energy is stored in an array of batteries  providing users with a continuous supply of energy even during peak usage times and at night, when the solar panels do not provide any electricity.  The DC power  from the solar array and batteries is converted to AC electricity using inverter which is then distributed throughout the service area via small overhead power lines.   The system is monitored wirelessly by Gram Power for energy theft or other usage abnormalities.

Each house is provided by a smart meter which draws energy from the micro grid and keeps track of how much of pre paid energy the user has remaining and provides a display to the user about the power consumption of their appliances.

A local village entrepreneur purchases bulk energy credit from Gram Power, which is wirelessly transferred to an 'Energy Wallet' that Gram Power provides to each entrepreneur. The entrepreneur then transfers this credit to individual Smart Meters in the village. Once recharged, the meters can be used to operate a variety of household appliances or even higher power water pumps for irrigation.
Gram Power's microgrids can also be integrated with the utility grid. This ensures that the infrastructure is not wasted when the utility grid reaches the village, and in turn makes the utility grid more reliable by adding in decentralized generation.

Email ThisBlogThis!Share to TwitterShare to FacebookShare to Pinterest
Labels: News about solar

What is solar water heating?

Solar water heating is nothing but the conversion of sun light into renewable energy for heating the water by using a solar thermal collector.  There are a number of technologies available worldwide for solar water heating systems.

For heating water using solar energy, a collector fastened to a roof or a wall facing the sun heating the working fluid which is either pumped ( in active systems ) or driven by natural convection ( passive systems ) through it.  The collector could be made of simple glass-topped insulated box with a flat solar absorber made of sheet metal attached to copper heat exchanger pipes and dark colored.  or a set of metal tubes surrounded by an evacuated glass cylinder.  The heat transfer fluid for the absorber may be the hot water from the tank but more commonly is a separate loop of fluid containing anti-freeze and corrosion inhibitor which delivers heat to the tank through a heat exchanger ( commonly a coil of copper heat exchanger tubing within the tank ).  Copper is very important component in solar thermal heating and cooling systems because of its high heat conductivity, resistance to atmospheric and water corrosion.

Residential solar heating installations fall into two categories - Passive and Active systems. Both of these systems typically include an auxiliary energy source ( electric heating element or connection to a gas or fuel central heating system ) which is activated when the water in the  tank falls below a minimum temperature setting such as 55  °C.  Hence hot water is always available.

Oil India which is the second largest Government owned exploration firm in India has recently commissioned a 5 MW Solar Power Plant in Rajasthan.  Oil India has so far has built only small solar power plants.  But now it has built and commissioned its first grid connected 5 MW Solar Power Plant at a village Raghwa in Ramgarh district in Rajasthan. The plant was inaugurated by OIL Chairman and Managing Director Sri S.K.Srivastava. The company is planning to expand this unit by another 9 MW which will be completed by the end of year 2015.  The 5 MW Solar Power Plant with Polycrystalline Technology was set up at a total cost of Rs.41.49 Crores.  There are 20,400 solar modules in the plant each having a capacity of 245 watts.  An over head transmission line of 11.49 Km has been constructed to feed in the generated power to the Grid.